ALMA (available as alma-git on the AUR) is a tool for creating persistent LiveUSB installations of Arch Linux. With one command you can generate a customised installation on a USB stick (or any other removable media) including the packages and config files you want, with full persistence.

This is very useful for disk recovery and system maintenance, and a great tool for all Linux users. Especially with the customisation options provided by collections of preset files (such as arch-i3-usb).

Opinions expressed are solely my own and do not express the views or opinions of my employer.

ALMA is a tool, written in Rust, to automate the installation of Arch Linux to removable media with persistent storage (i.e. it is usable as a normal system, booted from USB).

ALMA creates an ext4 partition, installs Arch Linux and sets the locale and installs GRUB for you. Full disk encryption is also available with the alma -e option, using LUKS, where you will be prompted for the password.

Note ALMA is available in the AUR as alma-git. I recommend the git version because there are some significant unreleased changes.

However, what really makes ALMA powerful is the ability to customise your installation with preset files.

Preset files are TOML files which specify one or more of the following:

Here is an example for installing alacritty and copying its config file:

The environment variable ALMA_USER would be the username, created in an earlier preset file.

An example of this is my arch-i3-usb collection, where I have a "minimal" preset collection in /preset and additional preset files in /additional for a more comprehensive installation.

This provides a full installation with i3, thunar, alacritty, neovim, fish and firefox ready to use. 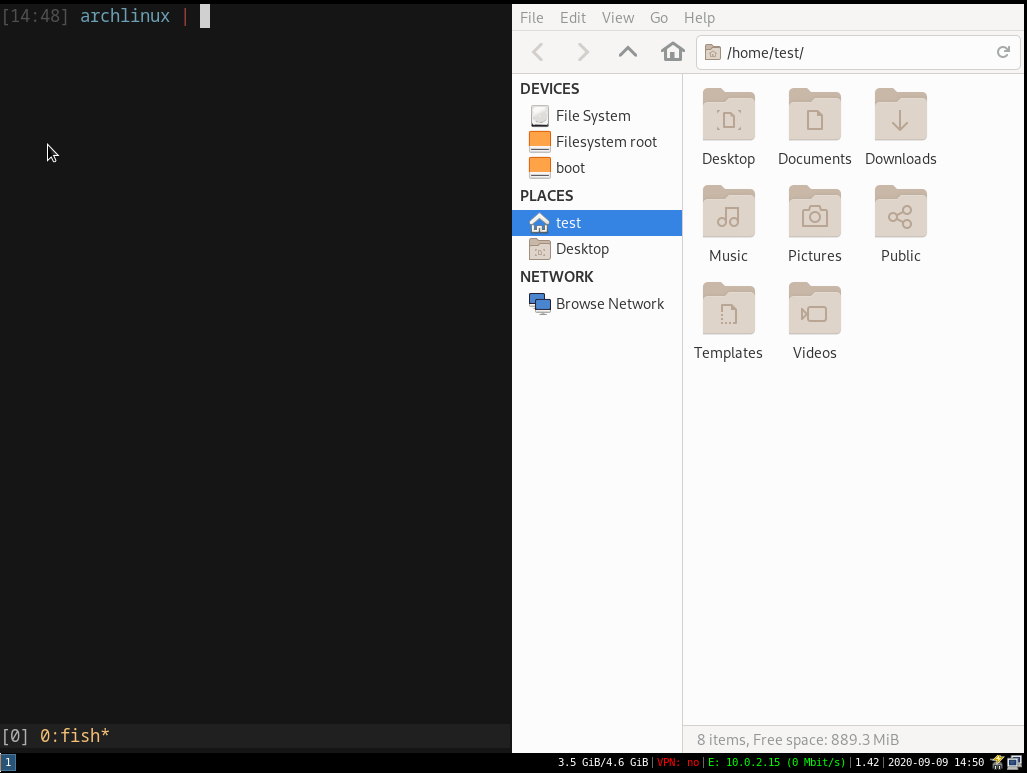 One known issue is that if you install a package which requires some initialisation step (such as setting the Rust toolchain after installing rustup) then you can't install dependent packages by the normal preset lists because all of the package installation takes place before any user scripts are run.

This means that in cases that need initialisation steps (such as Rust packages built from source), you will need to workaround this in the preset file. Here is an example for i3status-rust:

There are a number of small improvements that could be made in the near-future.

Support for SecureBoot could be added (probably to ALMA directly since it is a common requirement). The main difficulty here is testing, since you need to test it on actual hardware, and deal with adding the signed keys to the BIOS, etc.

A subcommand could also be added allowing the preset developer to lint their scripts with shellcheck to catch syntax errors.

It would be very useful to add a preset example for loading config files from a chezmoi repo (and other dotfiles managers) instead of just mounting shared directories.

It would also be useful to add a preset example for home partition encryption (i.e. not the whole disk) and unencrypting on login with polkit, etc. - for cases where full disk encryption is not desirable (i.e. on a USB with other partitions for general file transfer on FAT32).

In the more distant future, it would be great to allow ALMA to install to a specified (already existing) partition instead of wiping the disk. GRUB installation could also be optional in this case. This, plus an option to disable the few LiveUSB optimisations (like storing journal log data in memory, no swap, etc.), would allow ALMA to function as an installer for normal Arch Linux installations too.

With these additions, and the composable preset files, one could build a repository like the AUR for hosting different collections of preset files. So you could browse the repository, choose a configuration that appeals to you, install it to LiveUSB to try it out, and then use that same LiveUSB to install it to disk if you like it.

The repository would need to be easily auditable (like the AUR) since these preset files can install arbitrary packages and run arbitrary commands, so it is clearly a possible security risk (like any custom installer for Linux distributions).

Another huge addition would be the ability to run ALMA in a minimal Docker container, so it could be run on non-Arch Linux platforms. It would be great if it could be run on Windows and Ubuntu so as to bootstrap the installation process (i.e. first to LiveUSB, then create the necessary partitions on disk from the live environment and install to disk from there).

These are much larger additions, but I think that it would be incredibly useful to the Linux community as a whole to be able to share different configurations as installations directly. This is especially true for newer users, with the ability to try them out as a persistent LiveUSB first.

Hopefully you will find ALMA as useful as I have, and create a LiveUSB installation for future debugging and system recovery.

If you also find the possible future improvements interesting, please share your preset collections, or even contribute to ALMA directly!